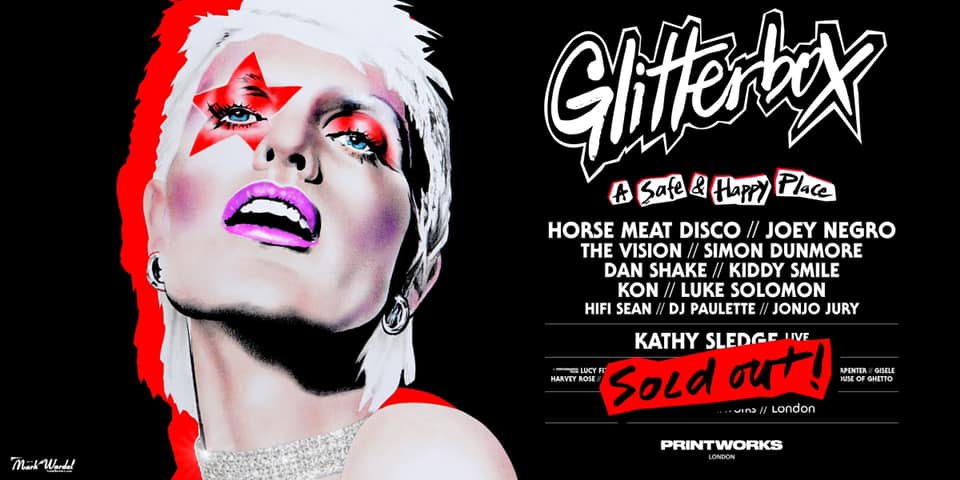 Glitterbox is set to return to Printworks, London on Saturday 7th March with another impressive offering of cutting edge production, DJs and disco extravaganza, with an original NYC ballroom twist. The event comes just over a year after Glitterbox’s sold out debut at the former printing press, one of London’s most in-demand music venues. Kicking off 2020 with its second sell-out Printworks party on New Year’s Eve, anticipation for tickets is now extremely high for this next date with tickets likely to sell out within weeks.

Joint headliners Horsemeat Disco and Joey Negro – DJ/producers both well-loved for pioneering the new disco formulas that set Glitterbox apart – will be setting the musical bar high, joined by The Vision, Simon Dunmore, Dan shake, Luke Solomon, Kon & from iconic disco act Sister Sledge, Kathy Sledge will perform live in the main hall. Fans of Horse Meat Disco will not want to miss out, as the DJ collective will be launching their album Love & Dancing on pre-order Friday 6th March, with the full release via Glitterbox Recordings on Friday 1st May.

Fresh from an appearance at Warehouse Project in Manchester in late 2019, The Vision will be bringing their discerning mix of disco and house, with live singers appearing to perform some dancefloor essentials including their Defected single ‘Heaven’, released in 2019 to critical acclaim.

In Printwork’s Dark Room will be a celebration of our performers, embracing ballroom culture and featuring voguers of ballroom culture featuring voguers from London and Paris popping, dipping and spinning to the sounds of Kiddy Smile, Hifi Sean (Sean Dickson), DJ Paulette and Jonjo Jury on the decks. The room will be hosted by Kiddy Smile, an ambassador of the ballroom scene who upholds the legacy of the balls in 1970s New York where voguing originated, and keeps the traditions very much alive and kicking around the world, via his hometown Paris.

Glitterbox’s events at Printworks feature the very biggest confetti moments, jaw-dropping production and uplifting dance floor moments. The party’s unique energy is provided by the Glitterbox dancers, drag queens, voguers and club kids – a gloriously uninhibited crew of party-starters who never fail to inspire hedonism from every person in the club with their infectious love for the music. Glitterbox attendees from all walks of life are encouraged to leave all their reservations at the door, turn their fiercest looks and express themselves to the fullest on the dance floor.