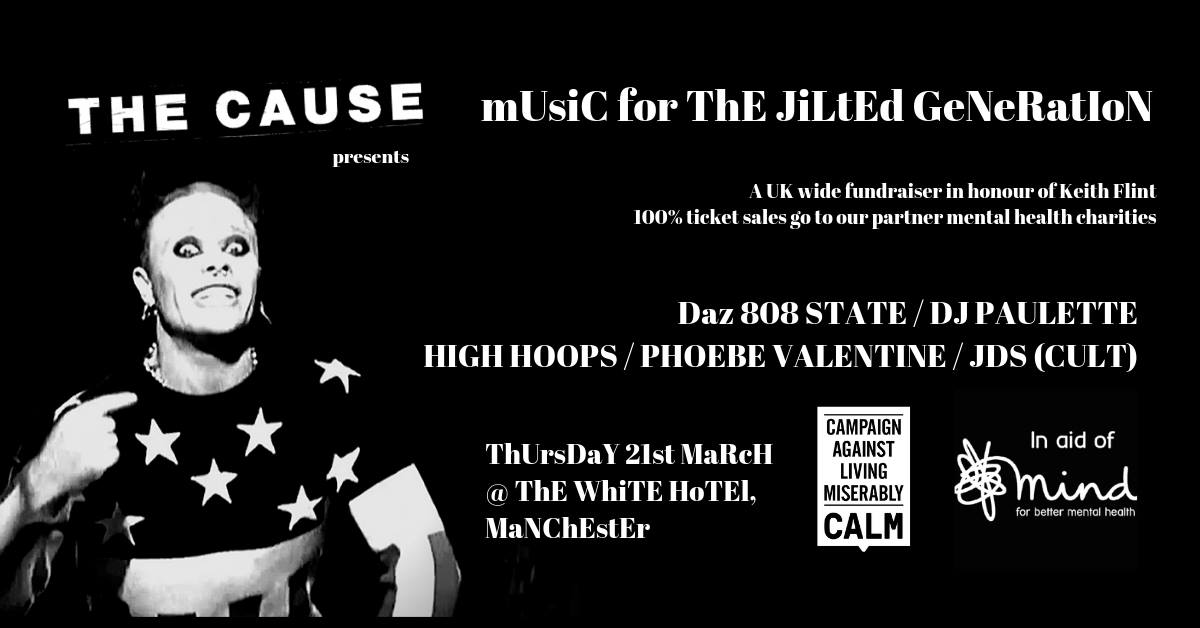 #CHARITY – THE CAUSE: MUSIC FOR THE JILTED GENERATION FUNDRAISER, THE WHITE HOTEL 21/3/19

The suicide and premature death of The Prodigy’s #KeithFlint touched the dance music population in a profound way. As a massive fan who has felt this loss musically and felt the resonances deeply in my personal life, I have joined forces with The Cause: Music For the Jilted Generation Manchester Fundraiser and will be celebrating Keith and raising money for the #CALM and #Mind mental health charities at the Music For The Jilted Generation fundraiser at THE WHITE HOTEL this Thursday (21st of March). I will be joined by Daz (808 State) High Hoops #PhoebeValentine and #JDS.

The Cause – London’s DIY, Underground dance space – is holding a UK-wide fundraiser in honour of Keith Flint with 100% of ticket sales going to our partner charities, dedicated to improving mental health and preventing male suicide.

Having raised over £5500 already and on track to double that from our London shows this Saturday, we have partnered with venues and local collectives in Manchester, Sheffield, Brighton, Southampton, Leeds, Edinburgh, Sunderland, Glasgow, Southend and many other cities in the pipeline. Our aim is to raise maximum awareness and funds for mental health charities.

Together, we can save lives x

Celebrating Manchester sound from the 90’s to now, we’ve curated you a lineup that fuses iconic Manchester DJs with some of the city’s freshest techno. Representing the glory days, Hacienda resident DJ Paulette and 808 State’s Daz will be spinning some classic acid house. Joining them are local techno favourites Phoebe Valentine, JDS and High Hoops.

Keith Flint was undoubtedly one of the greatest legends in the game, loved and respected by electronic music, punk and rock’n’roll fans alike. It is reported Keith took his own life.

Mental health affects us all and raising awareness of this was one of the key factors in establishing The Cause. As such, together with NLA Artists we are throwing a UK wide celebration of the music Keith and The Prodigy inspired, inviting local heroes alongside those who the band shared line-ups with and who’s records were played at events during their rise to fame. Expect plenty of Prodigy classics 😉

Please share this post – attend and support the event and these charities as much as you can. Thank you.